Congratulations to our Cross Country Team! 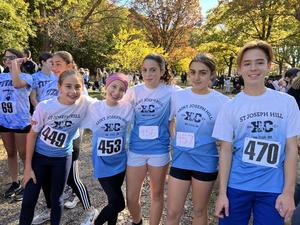 We are proud of our SJHA Cross Country Team for all their accomplishments at the Archdiocese of New York Cross-country championships at St. Joseph's Seminary in Yonkers! Read more here!

Finally, in the 7/8 grade race, the top 9 runners were from Staten Island with Hill teammates Emily Fahoum and Sofia Nicolo in second and third place. They were followed by Kirsten Harper (NDA), Adrianna Gigliotti (St. Clare), Chloe D’Arco and Gianna Patti of Hill, Olivia Iovino of NDA and Jayela Jones of NWP.